No sign of the expected lake bed where Perseverance rover landed

Enlarge / No, those donut tracks aren't mine, officer.NASA/JPL-Caltech/MSSS

The Perseverance rover landed in Mars' Jezero Crater largely because of extensive evidence that the crater once hosted a lake, meaning the presence of liquid water that might once have hosted Martian life. And the landing was a success, placing the rover at the edge of a structure that appeared to be a river delta where the nearby highlands drained into the crater. But a summary of the first year of data from the rover, published in three different papers being released today, suggests that Perseverance has yet to stumble across any evidence of a watery paradise.

Instead, all indications are that water exposure in the areas it explored was limited, and the waters were likely to be near freezing. While this doesn't rule out that it will find lake deposits later, the environment might not have been as welcoming for life as "a lake in a crater" might have suggested.

Putting it all together

Perseverance can be considered a platform for a large suite of instruments that provide a picture of what the rover is looking at. Even its "eyes," a pair of cameras on its mast, can create stereo images with 3D information, and offer information on what wavelengths are present in the images.

It also has instruments that can be held up to rocks to determine their content and structure; sample-handling hardware can perform a chemical analysis of materials taken from rocks. While the new information is divided into separate papers based on the instruments the data came from, the key thing is that all three paint a consistent picture and build off each other. For example, the spectroscopy tools provide details of a sample's chemical composition but they don't tell us how those chemicals are distributed in a rock.

In contrast, there are X-ray analysis tools that offer inexact chemical information, but they tell us how the chemicals it detects are located compared to the rock's visible features. And the cameras on the rover's mast can help us identify how widely distributed similar rocks are. Collectively, these tools tell us that Perseverance sampled rocks from two different deposits so far.

The first includes the crater floor where it landed, which is rich in iron- and magnesium-based minerals. Above that is a separate formation that appears to be volcanic rock, although we can't rule out that it was formed by rock liquified following an impact. Both deposits were clearly shaped by processes we know are happening on Mars.

Many of the rocks have been shaped by the wind and may have experienced some chemical alterations due to the atmosphere or radiation exposure. In places shadowed from the wind, loose regolith has built up, much of it with Mars' characteristic red tint. There's also a variety of debris from impacts, including some smaller ones within the Jezero crater.

But the big question is whether the materials show indications that water was present. The answer there is a bit of a "yes, but..." 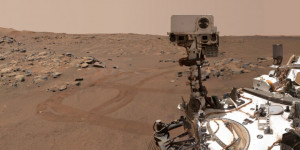 The key finding comes from the likely volcanic layer of materials, which is rich in a mineral called olivine. On Earth, olivine tends to be limited to deeper in the crust, as it tends to get dissolved or altered in the presence of liquid water.

And there's some evidence of that happening here; roughly a quarter to half of the olivine minerals found on these rocks seem to have been altered by exposure to water. But that means more than half of it has not. This means that any exposures to water that the rock has experienced were likely to be brief, or took place in a very cold environment where the water was likely to be near the point of freezing.

Other deposits in the rocks appear to have been left later in their history by cold, highly salty brines. Because these are already saturated with salts, they can't dissolve the olivine. But they did leave behind small deposits of sulfates in some of the gaps in the rocks.

Other deposits include perchlorates, which could have been left by subsequent brines, or deposited by the wind, after which they drew enough water out of the atmosphere to dissolve and seep into the rocks. None of those materials is likely to have been left by a lake; in fact, most of them would have dissolved if they had been exposed to lake water. "We have found no compelling evidence for lacustrine [lake-based] sedimentation in the crater floor regions thus far explored using the rover," one of the papers concludes. That doesn't mean there isn't any there.

It's possible that the lake was icy and transient or remained frozen for much of its history. Alternatively, Perseverance may only have explored areas where the lake sediments were eroded so far, leaving it looking at rocks that were under the lake for much of its history, or (in the case of the volcanic material) deposited after the lake dried up. All of this, of course, is relevant to our ability to infer things about Mars' prior habitability.

But the same work also provided some more directly relevant evidence. For example, the presence of olivine also indicates that any life that was present in these deposits couldn't have been closely associated with the minerals, as the microbes would also have been unable to obtain energy from an environment that left the olivine intact. The rover also picked up signs of organic chemicals, in the form of chemicals with one or more benzene-like rings.

That description could fit some of the chemicals involved in life on Earth, but could also fit a wide variety of other materials. The rover is likely to have an extended life ahead of it, and will slowly work its way to different deposits as it climbs up the delta formation, so this should be viewed as an interim progress report. So far, there's no sign of things we'd expect to find if we wanted a slam-dunk indication of a watery Eden.

But there will be more data to come that will continue to fill out our understanding of Jezero's history.