It'd be an understatement to say it's been a rough run for Halo Infinite. The latest in the classically Xbox-centric first-person shooter series, Infinite was released in November 2021 to a steady stream of positive reviews, though its popularity quickly died off due to an unintuitive progression system, a mountain of bugs, and a disappointing lack of fresh content delivered on anything resembling a consistent release schedule. Instead of becoming one of the quintessential multiplayer games of 2022, Infinite went out silently with no more than a whimper as its concurrent player count fell below that of its predecessor, Halo: The Master Chief Collection.

Longtime Halo had fans feared this would be the case, given how Halo Infinite developer 343 Industries handled its predecessor -- the largely middling Halo 5. Even though I enjoy Infinite's far more modern, Call of Duty-inspired take on the signature arena shooter style, it hasn't been quite the same without a few of the key features that fans have come to expect, like the Forge map editor and the economy of custom maps and modes that normally accompany it. That all changed on November 8 when 343 Industries dropped the Winter Update. It includes Forge Beta, campaign co-op mode, and a free multiplayer season with 30 progression tiers including sleek new Spartan customization options and several new maps, plus some other quality-of-life improvements like match XP. Those are all things that Halo Infinite sorely needed, giving disappointed fans a real sign of 343's dedication to Halo Infinite's ongoing development as a live service game.

The greatest draw of any Halo game -- post-Halo 3 -- is the series' highly-scalable approach to multiplayer.

Up until the Winter Update, Halo Infinite hadn't had any sort of in-game custom map support or campaign co-op, leaving social players at the mercy of whichever static matchmaking playlists existed at the time, including the famously broken Big Team Battle playlist. Even so, Halo Infinite still lacks any sort of split-screen multiplayer. So far, it appears that there's no such feature on the way for either Xbox or PC players (at least, not anytime soon).

But with the Winter Update, all the other missing pieces of the traditional Halo experience are finally included.

You can do (almost) anything in Forge Mode.

That includes the long-delayed Forge mode. I'm not the biggest fan of the process of making my own maps in multiplayer games, but I do recognize the importance of a high-quality map editor and talented designers within a game's community. Forge already leaked a few months ago, resulting in some positively wild maps like this one, but let's be honest: A Halo game without a built-in Forge mode feels wrong. It's a huge deal that Halo Infinite finally features the fully functioning editor built directly into the game.

Granted, the Forge Beta is currently feeling pretty unintuitive for me, but it does look like it could become deeply encapsulating if I were to learn the ins and outs of its interface. What's immediately clear, though, is just how much stuff you can do in this new editor, including plop down your own map geometry and turn the skybox completely purple. You can build entire maps from scratch if you want, but I'm satisfied just using the Forge editor to spawn 10 banshees above a gravity launcher, something you couldn't do conventionally before the Winter Update dropped.

I'm more inclined to play with the custom maps that other people create, and though I'm just getting started on that front, I'm already wildly impressed with the amount of creativity I'm seeing. If you're curious about seeing some of these maps for yourself, you can view the best maps made by the Halo Infinite community at Forgera.

Halo Infinite's recent updates to multiplayer matchmaking are far subtler, but they've kept me thoroughly entertained over the last few weeks. I haven't played with any of the new unlockable gear in the progression path for the Winter Update season pass, but I have spent an inordinate amount of time matchmaking in the highly entertaining Rumble Pit playlist.

The latter is basically a free-for-all mash-up that includes classic game modes like King of the Hill and Slayer, but often with a few twists like only having swords and grappling hooks at your disposal. 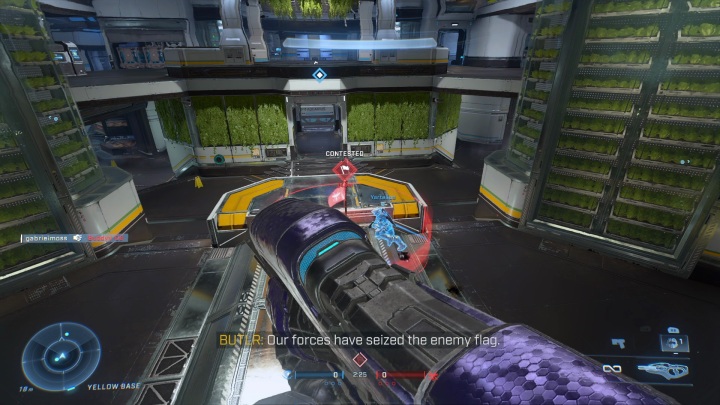 Covert One Flag is one of the new game modes added to Halo Infinite via its Winter Update.

There are new game modes as well, such as the new Covert One Flag mode, which is basically asymmetric CTF. In this mode, one team gets cloaking devices and needs to infiltrate the enemy team's base to capture a flag, but the defending team can almost immediately kill members of the infiltrating/invading team if they're quick enough to see through the infiltrators' invisibility. I'm a huge fan of these fresh twists on classic Halo action, but even more important to me is the inclusion of match XP, which translates to a steady tick of progression.

That leaves me feeling like I'm improving all the time instead of only when I'm meeting the criteria for certain challenges. Wrapping up the Winter Update is the inclusion of campaign co-op, which means you can finally run around in the Zeta Halo's open world with your buds if that's what you want. I was never that big into Halo Infinite's campaign to begin with, and I don't personally care to return to it any time soon, but it's nice knowing that if I do choose to come back, I can bring a friend or two.

Regardless, 343 Industries seems poised to put the "Infinite" back in Halo Infinite, and I'm ready for it.

Forge, and the flurry of multiplayer content that accompanies it, will inevitably bring players back to Halo Infinite once the holiday season zeitgeist is over.

Until then, I'm mostly just glad that we finally have some fresh options.