Apple vs. Samsung: who wins the lock screen battle in 2022?

Yes, there are similarities, but Samsung has done what Apple often does. Or as they say: "Good artists borrow, great artists steal."

Wallpapers - it's the little things that matter

Starting with the stock wallpaper selection, Apple offers a selection of six backgrounds, while Samsung lets you pick between 21 wallpaper options. Scrolling down in iOS 16, you will come across six Weather & Astronomy dynamic wallpapers, which are actually quite stunning to just tap and interact with.

Next, you have seven emoji-loaded wallpapers and an equal number of artistic background art with solid as well as gradient color styles.

When you pick the emoji wallpaper option, you can customize it with any emoji of your liking. Finally, you can have seven uniform-tone wallpapers with a clean fading texture.

One UI 5 also takes a similar approach but offers fewer wallpapers across different categories. You get nine single-tone backgrounds with a gradient effect and four graphical wallpapers with solid coloring and sharp lines.

You can adjust the gradient and saturation strength and create a combination from the spectrum option.

Users get this facility with One UI 5 as well as iOS 16. Both ecosystems offer a custom wallpaper option that lets you shuffle photos from your photo gallery on the lock screen throughout the day. But there's a crucial difference here.

One UI 5 asks you to select the photos manually.

You can pick up a bunch of snaps from your camera roll, the downloads folder, or the screenshot gallery. You can also mix up and create a carousel from whichever folder you like.

Apple does things a tad differently. You can still choose your lock screen photos from the gallery, but if you don't want to go through the hassle, you can just use the Photo Shuffle system. iOS 16 even lets you decide the frequency of how often lock screen wallpapers change.

If that sounds too much, select the Daily option for Photo Shuffle, and you will be greeted with a fresh image on your lock screen each morning.

Oh, did I tell you that the depth effect for wrapping the clock and widgets around image elements is stunning? Yeah, it's quite accurate and makes the lock screen look as if it was professionally edited.

Another neat touch is the ability to pick nature-centric photos or pictures of people's faces in your gallery. You choose either or both for the photo shuffle.

Once you've selected your photos, Apple lets you show the real colors or asks you to pick a black & white, duo-tone, and color-wash version of the same photo.

In my experience, I found Photo Shuffle to be a superior experience -- in terms of convenience, the versatility of adding effects, and the surprise element. It's a pleasant excitement every morning I unlock my iPhone 14 Pro, unaware of the nature photo that will greet me. It's a great way to revisit memories, and I love it. 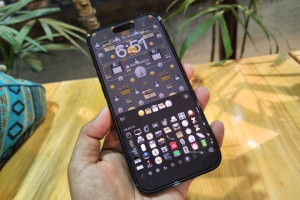 Samsung has its own wallpaper shuffling system, but instead of automatically picking photos from the phone's gallery, it sources an image from the Galaxy Theme repository. The pictures are refreshed on a bi-weekly basis, and you can choose up to five categories from among 14, which include landscapes, art, food, and of course, cats and dogs.

Samsung also lets you purchase wallpaper images across different categories, and the range available in the store is huge.

But I don't know many smartphone users that would pay for a lock screen wallpaper.

On a concluding note, neither iOS 16 nor its supposed copycat (read: One UI 5) seem like half-baked work. However, iOS 16's take feels more refined, and there are thoughtful conveniences that you can appreciate on a day-to-day basis. One UI 5 stands out with its sheer versatility, but it will make you work to really enjoy it.

Widgets for every kind of style 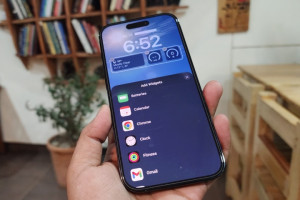 Starting with the all-crucial look of the clock widget, Apple lets you choose between six font styles, while Samsung ups the number to eight.

You can select the font color from the spectrum wheel on either phone.

A minor annoyance that you might run across while customizing the look of the clock widget on your Samsung phone is the roaming clock. You need to turn off the roaming clock system (which shows the time at your current location and your home city) before you can experiment with the designs.

However, only One UI 5 lets you add a gradient flavor to the text design, which may or may not stand out based on your wallpaper of choice. Personally, I think it looks garish and brings back the memories of WordArt font customization on older versions of Windows OS.

Three of them are digital clocks with different positioning for the day and calendar date. The other two are analog clocks with numbered and dotted styling. 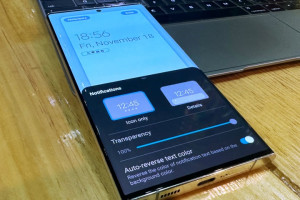 iOS 16 takes a slightly different approach, combining the widget atop the clock with day, date, and a third knowledge segment. This third segment can be a reminder, upcoming calendar entry, stock information, weather detail, fitness ring, or new emails in your inbox.

Underneath the clock option, you have space for adding widgets.

These widgets are available for many of Apple's first-party apps and some third-party ones, though not every app supports the widgets quite yet.

You can only add four square-shaped widgets to the lock screen, or two rectangular widgets -- depending on the amount of information you want to glean. You can't add a widget for an app of your choice to see alerts from it on the lock screen unless you swipe through the notifications carousel.

One UI does it a bit differently. On one hand, you can't add widgets on the lock screen.

But on the positive side, the widgets section below the clock turns into a condensed notification system that shows you alerts from any app for which notifications have been enabled.

One area where One UI 5 leaves iOS 16 far behind is the ability to change the lock screen shortcuts in the lower corners of the screen. On an iPhone, you get shortcuts for accessing the camera or turning on the flashlight.

In One UI 5, you can change either shortcut and add any app you want to launch with a single swipe right on the lock screen.

Overall, the approach to lock screen functionality is a tie between One UI and iOS 16. If you prefer a clean look without the clutter of notifications, iOS 16 is where you should nest. If you seek aesthetic as well as functional versatility -- and don't mind things getting a bit crowded -- One UI 5 is where you should live.

Deploying the lock screen for charity 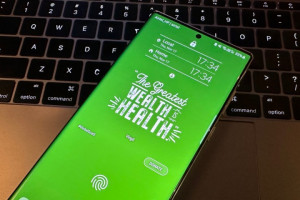 Samsung has something called "Global Goals" baked at the heart of its lock screen customization system.

Powered by an in-house app, it is part of a United Nations initiative to tackle issues such as hunger, poverty, and disease prevention, among a total of 17 objectives. Samsung is a part of the program, lending the lock screen on its phones to support a good cause.

A neat touch is that Samsung lets you add a widget flashing your personal information, just in case your phone is lost. Once enabled, it will turn your lock screen into a dynamic, ever-changing carousel of custom wallpapers and animations detailing a cause, alongside a Donate button that lets you contribute towards the objective.

Even more interesting -- and somewhat concerning -- aspect is the ability to run ads.

There's a dedicated feature in the app that is off by default, but one that runs ads on the lock screen when your phone is charging. Occasionally, you might see a "More" button instead of a "Donate" button.

When you tap on it, you will see an ad before you land on the information page. Once the ad stops playing, it flashes a "Reward Granted" banner at the top.

This ad is paid for by an advertising company, and when you watch it, you're rewarded for the effort.

It is a fairly non-invasive way of pushing ads, as it runs on the assumption that your phone is lying idle while charging. With just a click, an ad runs and earns money that you can donate without much hassle. Once you move past that page, you will see a window telling you how much you've earned watching that ad. 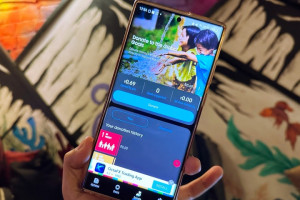 I couldn't verify whether you can transfer that amount after watching the ad in your bank account, but you see a prominent "Donate" button that lets you donate the ad money towards the cause you're supporting.

In my experience, these ads mostly have been around mobile games, food delivery services, and apparel -- the same kind that I'm used to seeing on Instagram. A quick look into the disclosure section reveals that Google and Facebook are the top ad service agents here.

But there are a few aspects that might spook privacy-conscious users. For example, it collects personal data, but it is not readily available to see at a glance.

Instead, the app redirects you to a Samsung Privacy web view, where you need to sign in with your Samsung account and then request a cache of all data that Samsung has collected. 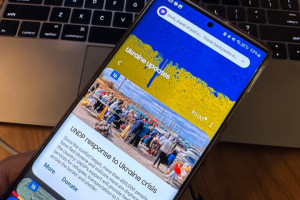 Here, you can also choose to sign out of the ad tracking system, but the whole process of doing so isn't really a cakewalk. Then there's another option called "Enhanced Ads" which shows more immersive ad content such as full-screen ads and newer types as advertisers developer newer ideas.

The Samsung Global Goals app itself has a selection of five animal-centric wallpaper modules, 14 animations, around 50 images, and a selection of 180 quotes from influential personalities, all of which is mixed-and-matched to show a unique combination every time you unlock your phone.

I love this approach.

It's something no other smartphone maker has attempted before, and it has been implemented beautifully. I can totally see myself engaging with at least a few ads worth a few hundred seconds, if that means I can support a few good initiatives and feel good about doing it, howsoever small the contribution might be.

Battle of the lock screens 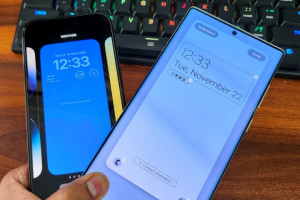 iOS 16 took the lead with lock screen customizations, but One UI 5 aped ... err ... took inspiration from Apple and created a rewarding lock screen experience of its own. iOS 16 offers a pleasant surprise experience with its photo shuffle system for randomly changing the wallpaper on a daily basis. Plus, the Depth Effect system for cleverly wrapping the wallpaper elements around the widgets is simply a stunning aesthetic addition.

One UI 5, on the other hand, races ahead when it comes to functional versatility. You get more styles to pick from, add a notification icon in the widget tray for any app installed on your phone, and you can even customize the quick action shortcuts on the lock screen. I particularly loved how Samsung injected a sense of charity right on the lock screen, and will proactively match your contribution.

There are no complex account setup hassles here, and something as insignificant as watching a 45-second ad will give you the joy of donating to a cause as noble as ending hunger and disease prevention.

In a nutshell, if you prefer refined aesthetics, go with iOS 16 on an iPhone.

If you seek functional versatility, One UI 5 installed on a Samsung smartphone will keep you happy.