For years, people in cars stuck behind blue delivery trucks in traffic have echoed media reports criticizing Amazon[3] for clogging American roadways. It's well-known that the Amazon drivers steering these fleets of trucks and vans don't actually work for Amazon but are hired by companies contracted by Amazon, and Amazon has repeatedly denied liability[4] for any dangerous driving reported, though. Because Amazon has contracts with more than 50,000 firms, just how dangerous Amazon's contracted drivers really are remains a question that is hard to track.

However, The Information reported[5] last year that horrific car crashes are part and parcel of Amazon's culture of convenience. And then more recently, The Wall Street Journal provided[6] another window into how deadly America's favorite speedy delivery service can be. Since 2015, WSJ reported this week, "Trucking companies hauling freight for Amazon have been involved in crashes that killed more than 75 people."

To arrive at this number, WSJ partnered with Jason Miller--a Michigan State University professor who researches transportation safety--to analyze various sources of government data from "3,512 trucking companies that were inspected by authorities three or more times while hauling trailers for Amazon since February 2020." The resulting report, WSJ said, "for the first time showed how the safety performance of Amazon's trucking contractors compared with their peers." And their results didn't appear good for Amazon. For example, a review of Department of Transportation data on unsafe driving scores of more than 1,300 Amazon trucking contractors from February 2020 to early August 2022 found that contractors who worked the most with Amazon were "more than twice as likely as all other similar companies to receive bad unsafe driving scores."

WSJ also found evidence of dozens of companies that Amazon contracted that had "conditional" ratings, which is like DOT putting them on probation--a black mark that typically alienates most firms from contracting them. One Illinois-based company contracted by Amazon "scored worse than the level DOT officials consider problematic" every month of WSJ's review period. DOT did not immediately respond to Ars' request for comment.

"First and foremost, the insinuation that Amazon puts more value on meeting deadlines than on human lives is categorically false," Nantel told Ars. "Any accident involving one of our partners or community members is a tragedy, and we always work with our contractors to prevent accidents or learn from them, so they don't happen again." However, WSJ reported that, although Amazon suspends contractors who violate its safety standards, that doesn't always end concerns of dangerous driving. The Journal's review of government data showed one Amazon contractor that continued hauling 55 loads after Amazon suspended its contract.

The safety director of Amazon's freight unit, Steve DasGupta, told WSJ that Amazon's goal for its "very safe network of tens of thousands of carriers" is "zero accidents, zero fatalities." A company spokesperson told WSJ that Amazon "offers condolences to families of people killed in crashes that involve its contractors" and noted that Amazon contractors had "a rate of fatalities per vehicle mile about 7 percent lower than the industry average in 2020." Since WSJ first contacted Amazon about their report more than two months ago, Amazon has suspended all contractors involved in car crashes described in WSJ's report, suspended or terminated 80 percent of contracts where WSJ found unsafe driving scores, and made changes to its screening process. Amazon also told WSJ that "so far this year it has warned or suspended about 1,200 companies in connection with violations" where WSJ found contractors were sub-contracting deliveries--yet another scenario where the keys to the big blue vans could end up in the hands of drivers who might not meet Amazon safety standards.

Nantel told Ars that another issue with WSJ's report was that the thousands of firms in WSJ's sample were not representative of Amazon's network, which contains more than 50,000 contractors. Amazon's DasGupta told WSJ that the company also prefers to analyze a company's safety score over a monthly period, not the nearly two-year period that WSJ relied on for its analysis. However, Miller--who helped WSJ with its methodology for their data analysis--told Ars that the two-year window is more appropriate because inspections can be so infrequent.

"Amazon's critique that only one month of scores should be examined has minimal merit," Miller told Ars, noting that the longer window ensures "enough inspections are present for meaningful decisions to be made."

Could Amazon ever be held liable for drivers?

WSJ reported that Amazon has argued in court "that it has little role in overseeing its contractors' safety on the road." Last year[7], after an Amazon delivery driver barreling down a highway nearly 14 miles per hour over the speed limit slammed into a Tesla, the Tesla driver, Ans Rana, wound up with life-threatening injuries, including spinal cord damage and traumatic brain injury. Rana sued Amazon[8], and his case seemed to be the first test of whether Amazon could be held liable for the drivers it contracts.

Rana accused the company of everything from informing the driver of the wrong speed limit on its app to negligent practices like sending text message reminders to seemingly prompt drivers to go faster when they fall behind promised delivery times--or risk being terminated. Among claims Rana made about Amazon's negligence in the suit was a claim of "mandating a delivery schedule that was unrealistic such that it forced the drivers to rush to the point it was unsafe and as a practical matter made it impossible to drive safely." Rana's case was due to drag on for many more months, with discovery extended until 2023, but Rana's trial attorney Scott Harrison of Monge & Associates told Ars that mediation has begun.

In the next few weeks, the mediation results could reveal more about the larger role that the courts might see Amazon playing when it contracts services from allegedly unsafe delivery drivers. Amazon declined to comment on the lawsuit. 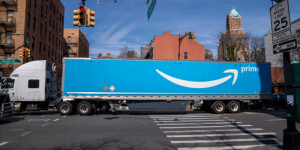 With everyday drivers, Amazon's delivery drivers share roads that experts have said are getting increasingly dangerous. Last year was "one of the worst years for roadway safety ever recorded," according to Truck Safety Coalition[9], a national network of crash victim and survivor volunteers.

Senator Alex Padilla (D-Calif.) told those gathered that "we know that better pay and working conditions create safer outcomes for all truck drivers and roadway users." To work toward that, he helped introduce the Guaranteeing Overtime for Truckers Act (GOT) to provide more stability for truck drivers. Trucker jobs have gotten harder since truckers have been pushed to become independent contractors, said Steve Viscelli, a sociologist at the University of Pennsylvania, who studies trucking. In 2016, he published The Big Rig: Trucking and the Decline of the American Dream, tracking how deregulation and breaking up trucker unions led truckers to take on longer routes, longer hours, and less pay.

This decline in quality of life has led to less experienced drivers taking on the job, Viscelli told Ars, which contributes to dangerous road conditions. "In trucking, like most things, you get what you pay for," Viscelli told Ars. "If you cut corners in trucking, you get more accidents. If you pay drivers poorly and pay them based on how much they drive and then make them sit unpaid for long periods, you will only get inexperienced drivers and drivers who can't get better jobs.

And then those already less safe drivers will be forced to choose between their paycheck and safety. That is a recipe for tragedy--literally." And as much as truckers like Amazon delivery drivers are criticized for making roads more dangerous, Cahalan told Ars that truckers must also confront increasing roadway risks.

"Truck driving is a grueling job with poor pay, poor flexibility, and poor benefits," Cahalan said, describing a trend where large motor carriers lead most drivers to burn out and quit every year. "On top of all that, it's regularly listed by the Bureau of Labor Statistics as one of the most dangerous jobs in America, with 800-900 fatalities annually[12]," Cahalan said. Truck Safety Coalition truck crash survivor and victim volunteers are pushing Congress to weigh policy solutions. Better pay for truckers through Congress passing the GOT Act would help, Cahalan told Ars, as well as strengthening oversight of trucking companies by the Federal Motor Carrier Safety Administration within the DOT.

There are also technology solutions to consider, though.

Cahalan told Ars, "We need to do all we can to implement low-cost, proven safety measures that will drastically reduce the likelihood of death or severe injury." These include making Automatic Emergency Braking and Advance Driver Assistance Systems standard tech in all commercial motor vehicles to improve driver safety.